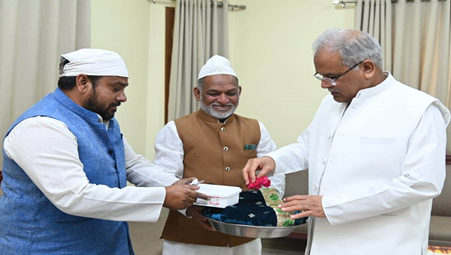 Prayed for happiness, prosperity, and progress of the state and country

Raipur (thestates.news)| Chief Minister  Bhupesh Baghel on Tuesday handed over a ‘Chadar’ and flowers that would be offered at the shrine of Hazrat Khwaja Moinuddin Chishti Garib Nawaz in Ajmer. Chief Minister handed over the offerings to Aldermen Naeem Raza and Shri Faheem Khan. Naeem said Raipur Mayor Aijaz Dhebar along with a group of 40 people will take this Chadar to Ajmer. This Chadar being sent by the Chief Minister will be offered at the holy shrine on Urs of Khwaja Moinuddin Chisti. Shri Baghel has prayed for the happiness, prosperity, and progress of the state and country.