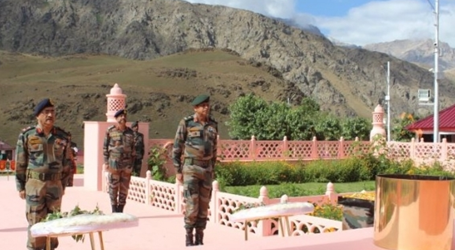 New Delhi,(thestates.news)| Point 5140, located in Dras in Kargil sector, the memorial built in memory of the Kargil war martyrs has been renamed as ‘Gun Hill’. During the Kargil war with Pakistan, the Artillery Regiment of the Indian Army had shattered enemy’s defence with its lethal and precise firepower. The point 5140 had played a major role in completing this campaign quickly.

On behalf of the Artillery Regiment, Director General of Artillery Lt General TK Chawla paid floral tributes at the Kargil War Memorial, Drass. He was accompanied by former gunners who took part in the operation. Lt General Anindya Sengupta, General Officer Commanding, Fire-and-Fury Corps also laid wreath. The event was held in the presence of ex-servicemen of all artillery regiments who have received the honorific title ‘Kargil’ in Operation Vijay. Serving officers of artillery were also present on the occasion.(HS):