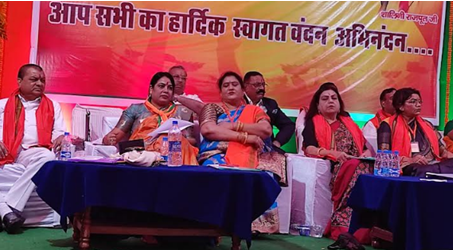 Addressing the meeting, Union Minister Renuka Singh ji said that today incidents like robbery, dacoity, theft, rape, molestation are happening everywhere in the state and criminals are roaming fearlessly, the law and order situation of the state has completely collapsed. There is no such thing as law and order in the state. He said that Modi ji, the successful Prime Minister of the country, has brought relief to the general public by reducing the price of petrol and diesel, while the state government, after making big brats, cleaned petrol and diesel by only 78 paise and 1.44 rupees. It has been told that they have no concern with the public.

BJP Mahila Morcha national executive member Seema Patre said that women are another form of power, if she is determined to do something, then nothing is impossible for her. Where did he have to take the plans of Prime Minister Narendra Modi to the people and tell the people about the failures of the state government. He said that during the Congress rule, there is no person to take care of the people. He said that after going to another state, farmers come there by paying Rs 50 lakh as compensation for suicide and the Chief Minister does not have time to see the condition of the farmers of his state.

State in-charge of BJP Mahila Morcha, Ms. Lata Usendi said that the State Government could not provide the benefit of the Pradhan Mantri Awas Yojana given by the Central Government to the people of the State. He said that even the roof provided to the poor is not getting due due to the negligence of the government. He said that the state government is doing the politics of Badlapur. The poor are being deprived of all the schemes given by the central government. He has asked the state government to be ready to face the consequences.

State President Smt. Shalini Rajput said in her presidential address that women will take the failures of the Congress to the door-to-door in the coming times. Women will do their work in the society with patience, awareness and fearlessness and will take the welfare schemes of Prime Minister Modi ji to the people and in the coming time, women will make their important contribution in forming the BJP government.

Ramsevak Paikra ji in his speech provided detailed information about the importance and specialty of the organization.