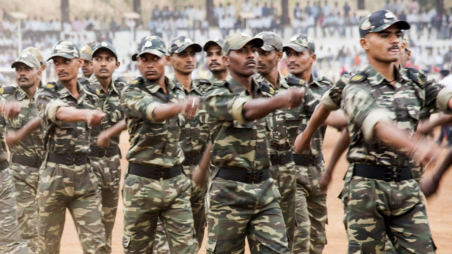 New Delhi,( thestates.news): The Army issued guidelines on its website to start the recruitment process under the Agnipath scheme on Monday. The recruitment of firefighters in the Army will be done on the basis of ‘All India All Class’. That is, any Agniveers can be posted in any regiment and unit. Notification will be issued on July 01. After that youth can start registration.

So far, the recruitment of soldiers in the infantry regiment of the army has been done on the basis of caste, religion and region. Changes have been made in the rules for the recruitment of Agniveers. According to the rules issued for Army Agniveers, all Agniveers will be bound by the Official Secrets Act, 1923. Under this, no Agniveer will be able to disclose any kind of confidential information to any unwanted person. Apart from this, all other facilities and rules are the same as the Air Force has issued earlier.

It has been clarified in the army rules that apart from this, about Rs 11 lakh as service fund package and the full salary of the remaining job will also be given to the family. In total, the family will get about one crore rupees. For gallantry and valor against the enemy, the same gallantry medals will be given to the soldiers. In case of 100% handicap in the line of duty, ex-gratia will be Rs 44 lakh. Along with this, full salary and service fund package of the remaining job will also be given.

It has been made clear in the army rules that during the service of four years, Agniveer would not be able to leave the army of their own free will, they would be able to leave the job only after completing the service period of four years. They would be allowed to leave the service only in exceptional circumstances. After four years of retirement, about 10.04 lakh will be available as a service fund package. In fact, in the service fund package, each Agniveer has to deposit 30 per cent of their monthly salary of Rs.30,000 and the same amount will be deposited by the government every month. Pension and gratuity will not be available on retirement.

It has also been made a rule that in exceptional circumstances, Agniveers who are out of the army before four years will get the same part of the service fund package that they have contributed, that is, the government contribution will not be received. Agniveers will have a separate badge on their uniform which will differentiate them from other regular soldiers. Candidates who are below 18 years of age will be able to apply for Agnipath scheme only with the permission of the parents.

Notification for the recruitment of Agniveers in the army will be issued on July 01. After that youth can start registration. The first rally for recruitment will start from the second week of August. There will be physical test and medical. After that there will be an entrance exam. Then they should be sent in column wise by merit. The rallies will be held in two batches from August to November. In the first lot, 25,000 Agniveers will come in the first week of December. The second batch of Agniveers will arrive in February. There will be a total of 83 recruitment rallies till every last village in every state of the country.(HS)