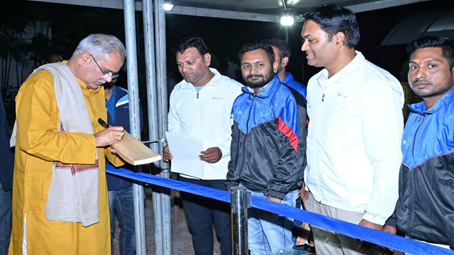 Raipur (thestates.news)|  The organizers of the Dhamtari Vidhansabha Level Night Tennis Cricket Competition 2022-23, to be held in Dhamtari district under the banner of the ‘Mukhyamantri Trophy,’ visited Chief Minister Bhupesh Baghel at his residential office. On the day of the final match, members of the organizing committee invited the CM as a chief guest. The Chief Minister thanked them for the invitation.
During this time, the Chief Minister signed the cricket bat brought by the organizers and wrote a message of best wishes on it, which would be awarded to the competition’s ‘Man of the Series’ player. On this occasion, Anand Pawar, the coordinator of this cricket tournament, Shakush Gupta, Pankaj Dewangan, Sanket Gupta, Devendra Dewangan, and Tushad Jaish were present.