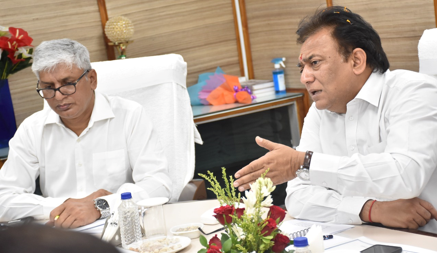 Bilaspur (thestates.news)  | Dr Jain focused on three mega mines of the SECL namely Dipka, Kusmunda and Gevra. While the SECL has grid its loins to produce 182 million tonnes (MT) coal in the current fiscal, the three mega mines located in Chhattisgarh’s Korba district will share 135 MT.

SECL Chairman-cum-Managing Director Dr Prem Sagar Mishra along with top officials of the company were present in the meeting. The General Managers of different projects joined through the video conferencing.
After reviewing the production and dispatch point-by-point in the three mega mines, the Coal Secretary gave necessary direction to the SECL officials for the further betterment of operations. He said the coal was required as the economical activities had increased and it was coal companies’ duty to support the Nation by meeting the demand,” Dr Jain said.

Applauding the efforts of SECL in supplying good quality and sized coal, Dr Jain said the company had been an important arm of the CIL and playing crucial role in meeting the dry fuel demand in the country.A team of officials from the South East Central Railway led by General Manager Alok Kumar joined the meeting to address the issues concerned with the department. Besides the availability of rakes, matters related to railway siding in anticipation of enhanced production in SECL were discussed in length.