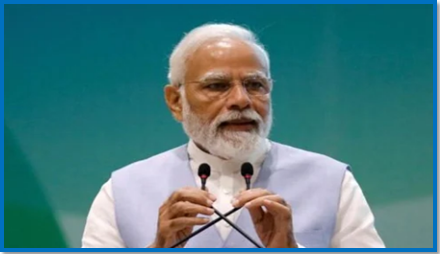 Visakhapatnam / New Delhi,(thestates.news): Prime Minister Narendra Modi on Saturday said that the government is giving importance to an integrated approach to infrastructure development as the country has suffered huge losses due to the isolated approach. He said that in the Azadi Ka Amrit Kaal, the country is moving fast on the path of development with the aim of a developed India.

The Prime Minister was speaking after dedicating projects worth over ₹10,500 crore to the nation at Visakhapatnam in Andhra Pradesh. He said that the connectivity, oil and gas sector related projects being taken up in Visakhapatnam would give impetus to the development of Andhra Pradesh and its coastal areas.

He said that the Economic Corridor for which we laid the foundation stone today has a 6-lane road. A separate road will be made to reach the port. On one hand, the Visakhapatnam Railway Station is being redeveloped and on the other the fishing harbour is being modernised. The Prime Minister said that PM Gati Shakti Yojana has accelerated the creation of infrastructure and reduced the cost of projects. Investments in India are increasing due to PLI scheme, GST, IBC, National Infrastructure Pipeline and momentum. He said that schemes for the welfare of the poor are being expanded.

He also underlined the government’s focus on the blue economy. He said that today the country is also making efforts on a large scale to realise the infinite possibilities associated with the Blue Economy. Blue economy has become such a big priority of the country for the first time. He mentioned measures like Kisan Credit Card for fishermen and modernization of Visakhapatnam fishing port which started today.

The Prime Minister said that the whole world is passing through a period of struggle. Many countries are worried about their declining economy. However, India is scaling new heights and creating history in many fields. The world is looking towards India. Experts and intellectuals are praising India. Today India has become the centre of hope of the world, he said.