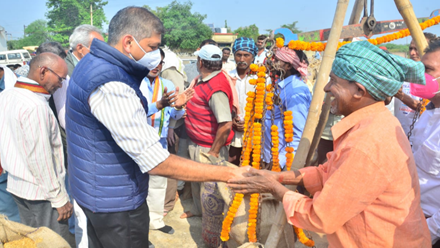 Nearly 22.66 lakh farmers to sell their paddy through 2399 cooperative societies of the state

Raipur (The States. news) As per the announcement of Chief Minister Mr. Bhupesh Baghel, the process of paddy procurement on support price for Kharif marketing year 2021-22 has been started in the state from December 1. Nearly 105 lakh metric tonnes of paddy is estimated to be procured this year. In this Kharif year, about 22.66 lakh registered farmers will be selling their paddy through 2399 cooperative societies. For the convenience of farmers and villagers, Chhattisgarh government has given permission to start 88 new paddy procurement centers in the stat

Chief Secretary Mr. Amitabh Jain personally visited Jaroda and Bangoli procurement centers in Raipur district and inspected the arrangements. He welcomed the farmers at the procurement centers with flowers and garlands. After the performing the customary rituals, he himself started weighing the paddy for procurement. In Kharif marketing year 2021-22, state government will procure paddy from farmers on support price through cash and linking from December 1, 2021 to January 31, 2022 and maize will be purchased from December 1, 2021 to February 28, 2022. For the Kharif marketing year 2021-22, the rate of support price for average good quality paddy (paddy common) has been fixed at Rs 1940 per quintal, Grade A paddy at Rs 1960 per quintal and average good quality maize at Rs 1870 per quintal. Nodal officers have been appointed for smooth and transparent operation of paddy procurement system.