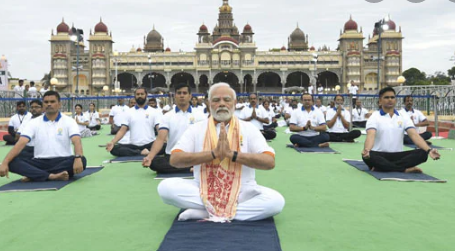 New Delhi,  ( thestates.news) : Yoga provides us with a sense of calm. Yoga brings peace to groups as well as individuals. Yoga is a source of peace in our society. Yoga brings peace to our countries and the rest of the world. Yoga also brings harmony to our universe On Tuesday, Prime Minister Narendra Modi led the celebrations of the International Day of Yoga in Mysuru, Karnataka. Yoga is no longer a part of life; it is a way of life, he stated emphatically. The Yoga Day event began with a speech by union AYUSH Minister Sarbananda Sonowal, followed by a speech by Karnataka Chief Minister Basaavraj Bommai, who spoke to the crowd about the importance of yoga in people’s lives. On the 8th International Day of Yoga, Prime Minister Modi emphasised the importance of yoga in everyone’s lives.

Everything in the universe begins with our own body and soul. The universe begins with us. Yoga, on the other hand, makes us aware of everything within us and builds a sense of awareness, the PM added.He went on to say that yoga isn’t just for individuals, but for the entire human race. Yoga is for all of humanity, not just for individuals. That is why the theme of this International Yoga Day is ‘Yoga for Humanity,’ PM Modi said in his address ahead of leading the 8th International Yoga Day celebrations on Tuesday. This year’s highlight is Guardian Ring of Yoga, which emphasises the concept of One Sun, One Earth. PM Modi explained this concept in his speech, saying, This time, we’re using a similar innovative use of the ‘Guardian Ring of Yoga’ all over the world on an international level as well. People practise yoga in different countries around the world as the sun rises and sets.(H.S)