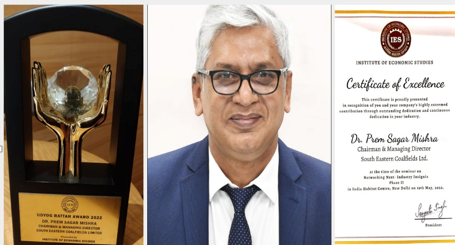 At a function held in the national capital on Thursday at India Habitat Centre, Assam Governor Jagdish Mukhi gave away the award to Dr Mishra for his outstanding leadership in the coal industry. Institute of Economic Studies, New Delhi, is the country’s premier institute working towards public awareness. It is a not-for-profit organisation.

Known for his expertise in the coal mining especially underground mines, Dr Mishra has been the brain behind many innovations in the sector. He had worked in many major coal mines. In February, took over the command of country’s largest coal producing company, the SECL—an entity of state-run Coal India Limited. Earlier, he was posted as CMD of another CIL entity, the Eastern Coalfields Limited (ECL).

He did his B. Tech (Mining) from Indian School of Mines, Dhanbad in the year 1987 and he obtained First Class Certificate of Competency in the year 1990. He joined the SECL in 1987 and is probably the first person to have elevated to its top spot.
Dr Mishra worked in different managerial capacities in several mines of SECL for more than sixteen years. He also worked as Deputy Chief Mining Engineer/Project Officer in various open cast mines of Central Coalfields Limited for about five years. On being posted at BCCL in June, 2008, he worked interalia as GM of Block II Area and GM of Barora Area. He was appointed as Director (Production & Planning) of Orissa Minerals Development Company Limited in November, 2015.

He has obtained a Post Graduate Diploma in Business Law from the West Bengal National University of Juridical Sciences (NUJS), Kolkata.

Dr Mishra has been a leader par excellence and he has won several Awards for over-all performance, Production, Safety, Profit, Stock liquidation, Overburden removal and for Ecological Restoration. He had conceptualized and implemented Coal Tourism at Barora Area, BCCL. He has been a resources person for delivering lectures on invitation by different academic and other institutions.