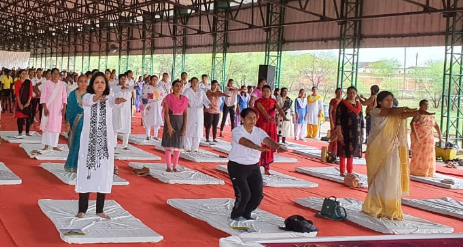 Raipur ( thestates.news)| Over 1200 people performed various Yoga asanas at a mass yoga event organized at Mata Kaushalya temple premises located at Chandkhuri in Raipur to mark the occasion of 8th International Yoga Day today.Chhattisgarh Yoga Commission Chairman Gyanesh Sharma was the chief guest of this programme. Raipur Mayor Aijaz Dhebar also participated in this mass yoga practice session. Various yoga poses including Pranayama along with meditation were performed by the participants under the guidance of more than seven yoga instructors and yoga teachers. 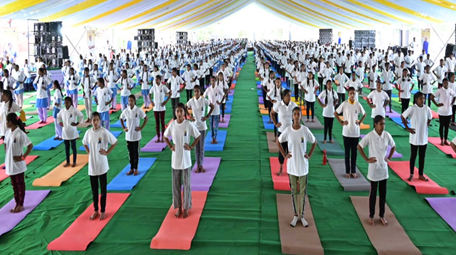 More than 1200 people including senior citizens, differently-abled, public representatives as well as a large number of students participated in this mass yoga event. Efforts were also made to raise awareness about Yoga among rural masses and to create a positive environment for yoga. It is worth mentioning that on December 11, 2014, the United Nations General Assembly proclaimed 21 June as the International Yoga Day. In the resolution, the United Nations General Assembly recognizes that yoga offers a holistic approach towards health and wellness. Yoga not just helps to maintain balance of mind and body but also helps in building and maintaining good human relations. In keeping with this spirit, the theme for this year’s Yoga Day celebrations is “Yoga for Humanity.”