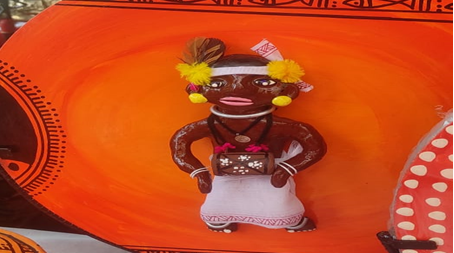 Raipur (thestates.news) | The Tribal Dance Festival has a strong marketing strategy, and artisans may expect positive feedback from both domestic and international customers, he further added. He believes that by being the primary artist in Matparai, his revenues will rise, and setting up stalls in Rajyautsav has helped him to promote Chhattisgarhi culture.

This year, the Rajyautsav welcomed around 1500 artists from different states and internationally. People are delighted to witness obsolete works of art. People want to learn this kind of art, he said.Festival of tribal dance featuring performers from 28 states and 7 union territories. Ten other countries that performed the tribal dance during the event include Mozambique, Togo, Egypt, Mongolia, Indonesia, Russia, New Zealand, Serbia, Rwanda, and the Maldives.

Chief Minister Bhupesh Baghel always aims to safeguard the long-standing customs and rights of the indigenous people. As it helps to promote Chhattisgarhi culture over the globe. By saying this he expressed his gratitude towards the Cheif Minister.