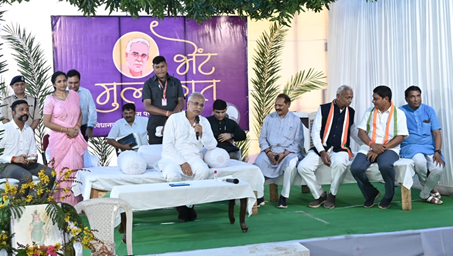 Raipur(thestates.news)| Today, Chief Minister Bhupesh Baghel reached Rajpur village of Lailunga Assembly constituency of Raigarh district for the Bhent-Mulaqat campaign. He worshipped Lord Jagannath, Balabhadra and Mata Subhadra in the Shri Jagannath temple located in the Rajpur village and prayed for the happiness and prosperity of the state. He was welcomed by the local women who honoured him by offering a hat made of Kans grass and paddy. The Chief Minister also honoured these women by giving sarees to them. A Kadamba tree was planted on this occasion.