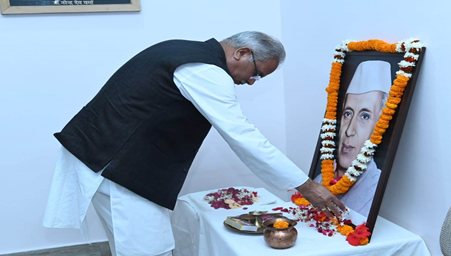 Raipur (thestates.news) Chief Minister Bhupesh Baghel paid floral tributes to the first Prime Minister Pandit Jawaharlal Nehru of India on his birth anniversary, at his residence office today. In his congratulatory remarks on Children’s Day, he said that Pandit Nehru loved children. He was fondly known as “Chacha Nehru” by children. Children’s Day is celebrated on Pandit Nehru’s birthday in recognition of this affection and love. On this occasion, Mrs. Yashoda Verma, MLA of Khairagarh, was also present.

Shri Baghel said the state government is following in the footsteps of Pandit Nehru and has made many important decisions. To provide quality education to the children, Swami Atmanand English Medium Schools have been established. The same is being done for Hindi-medium schools; the “Mukhyamantri Suposhan Yojana” has been launched by the state to eliminate malnutrition among children. As a result of which more than 2 lakh children have been freed of malnutrition.