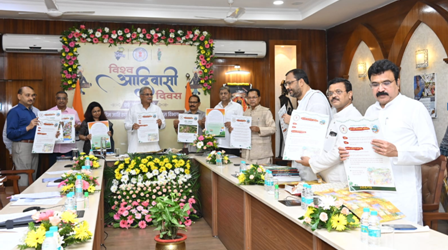 Raipur (thestates.news)| A campaign to raise awareness regarding Community Forest Resource Rights will be run in the state from August 15 this year to January 26, 2023. The aim is to make the scheduled tribes and other traditional forest dwellers aware of their rights on the forest land.

Meanwhile, guidelines for implementation of Community Forest Resource Rights have been prepared at the state level and workshops were organized for field workers, but information and procedures were still not accessible to the Gram Sabhas. Keeping this in view, Chief Minister felt the need for running a special campaign to make Gram Sabhas aware in this regard. The Foundation for Ecological Security in collaboration with the forest and tribal development department prepared a calendar for this campaign to educate the Gram Sabhas about the aforementioned procedures. This calendar was launched by Chief Minister Bhupesh Baghel on August 9 on the occasion of World Tribal Day.

The campaign will be kicked off during the celebrations of the 75th year of Independence Day of India, reciting about the Forest Rights Act in all the Gram Panchayats. A target has been set to have a discussion on community forest resource rights in the Gram Sabhas of all forest-based villages across the state by January 2023. As a part of this campaign, Gram Sabha will be organized in August for launching claims, talks with the Chief Minister through ‘Lokvaani’ in September, proposals in the Gram Sabha in October, programmes on the State Foundation Day in November, Haat Bazaar in December and discussions in the Gram Sabhas in the month of January. All the voluntary organizations indulged in this work for a long time will join the campaign.Meanwhile, campaign song, awareness posters, and a film based on the efforts of Charagaon Gram Sabha were screened during the launch of this campaign in a programme organized here by the Tribal Development Department on Tuesday.