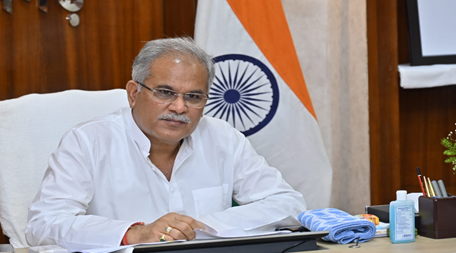 Raipur(thestates.news)|Chief Minister Bhupesh Baghel has directed the Chief Secretary to prepare an action plan to include millets in the state’s ashrams and mid-day meals, considering the effective role of millets (Kodo, Kutki, Ragi) in controlling malnutrition. He also directed to prepare an action plan for promoting millet-based industries after discussing with the concerned departments. He also directed to include malnourished children and anemic women in the action plan of the Chhattisgarh Millet Mission.

He said that Chhattisgarh is the only state in the country that has fixed the minimum support price for Kodo, Kutki, and Ragi and has ensured its procurement through procurement centers. In addition to this, an input subsidy of Rs.9000 per acre is also being provided to millets-producing farmers by including these crops under the purview of Rajiv Gandhi Kisan Nyay Yojana.  The area under cultivation of millets in the state has increased from 69 thousand hectares to 01 lakh 88 thousand hectares. Under the Chhattisgarh Millet Mission, a target has also been set to increase the productivity of millets from 4.5 quintals per acre to 9 quintals per acre i.e. doubling the per acre quantity. Chhattisgarh was awarded and honored as the best-emerging state for the promotion of millets in the ‘Poshak Annaj Award-2022’ organized by the Indian Institute of Millet Research (IIMR), Hyderabad, and Union Ministry of Agriculture and Farmers Welfare at Hyderabad recently.