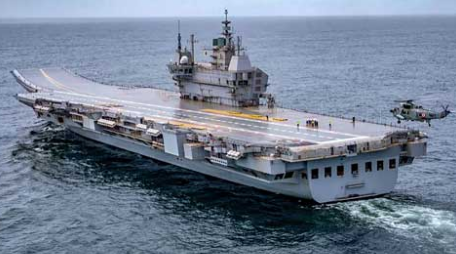 New Delhi, (thestates.news) : Indian warship INS ‘Ajay’, which shook Pakistan in the Kargil war, was decommissioned on Monday after 32 years of illustrious service. The ship’s national flag, naval ensign and de-commissioning pennant were lowered at sunset, marking the end of commissioned service. During her service, the ship participated in several naval operations including Operation Talwar during the Kargil War and Operation Parakram in 2001.

INS Ajay (P-34) was commissioned on January 24, 1990 at Poti, Georgia in the erstwhile USSR. It was part of the 23rd Patrol Vessel Squadron under the operational control of the Maharashtra Naval Area. The ship had proved its mettle during its illustrious voyage in active naval service for more than 32 years, Operation Talwar during the Kargil War and Operation Parakram in 2001-2002 during the India-Pakistan standoff. Also participated in several naval operations of the Indian Navy. After the Uri attack in 2017, the ship was deployed to guard the maritime border.

The ‘sea warrior’ was decommissioned as soon as the sun set on September 19. The traditional release ceremony was held at the Naval Dockyard in Mumbai. Vice Admiral AG Thapliyal (Retd), Commissioning Commanding Officer, was the Guest of Honour. The ceremony was presided over by Vice Admiral Ajendra Bahadur Singh, Flag Officer Commanding-in-Chief, Western Naval Command.

The event was attended by a large number of personnel including the ship’s commissioning crew, former commanding officers, current crew, their families and senior officers of the Indian Navy. The event was attended by Flag Officers, senior officers from the Indian Army, Indian Air Force and Indian Coast Guard. Over 400 personnel of the three services of the Indian Armed Forces were also present.(HS)