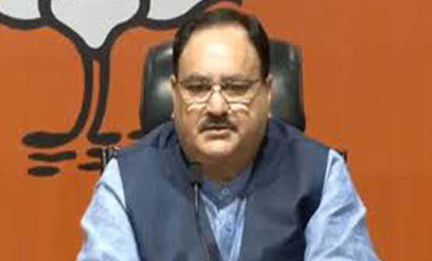 Addressing party workers at Valpoi in North Goa, he asked the workers to strengthen the party in all the 40 constituencies in the state and ensure that the party comes back to power post assembly elections in the state.

‘We received 32 per cent votes in 2017 and formed a government. Performance in Zilla Parishad elections too was good. Now our duty is to take it ahead,’ he said.

Remembering former Defence Minister and Chief Minister of Goa late Manohar Parrikar, he said, ‘Parrikar worked for the welfare of the people and brought changes in their life. We remember how he attended the inauguration function of Atal Setu in spite of being ill and asked how is the ‘Josh’. I am sure Pramod Sawant will take ahead the legacy.’

Mr Nadda said Prime Minister Narendra Modi had special attachment with Goa and that was the reason that spoke to the people of the state after it achieved the target of 100 per cent of COVID vaccination.

He expressed confidence that the target of a second dose of COVID vaccination would be achieved soon.

The BJP President said the COVID vaccination had impacted the tourism sector adversely but now more and more people were visiting the state.

Targeting the Congress party, he said its leaders used to make promises during elections and forget them later.

He listed out various schemes run by the state government and support extended by the Central government for development of the state.

Earlier, addressing party workers at Amona in North Goa, he exhorted party workers to work with full energy to ensure BJP’s win in the upcoming assembly elections once more.

‘While Prime Minister Narendra Modi and Chief Minister Pramod Sawant are making efforts, you too should see that the party is strengthened and there is happiness in society. Women are empowered and even the interests of those belonging to marginalised sections of society are protected,’ he said.