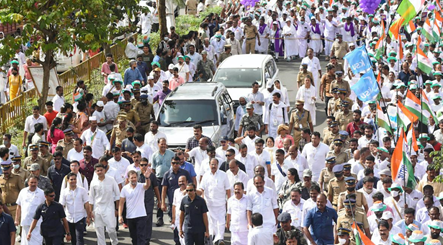 New Delhi, (thestates.news)|Congress president Mallikaarjun Kharge on Saturday condoled the death of MP from Punjab’s Jalandhar, Santokh Singh Chaudhary and said his demise is a great blow to the party.
“Deeply shocked and saddened to learn about the untimely passing away of our MP, Santokh Singh Chaudhary. His loss is a great blow to the party and organisation.In this hour of grief, my heart goes out to his family, friends and followers.May his soul rest in peace,” Mallikaarjun Kharge wrote in a tweet.

“Shocked by the sudden demise of Santokh Singh Chaudhary. He was a down-to-earth hard working leader. I express my condolences to the bereaved family,” the Wayanad MP wrote.
Congress general secretary in-charge of Organisation KC Venugopal said, “Devastated by the sudden passing away of Lok Sabha MP and Congress Parliamentary Party Secretary Santokh Singh Chaudhary during the Yatra today.
Our sincere condolences to his family. The entire Congress family mourns his passing. Om Shanti.”
The 76-years-old parliamentarian passed away on Saturday morning following a sudden cardiac arrest .(UNI)