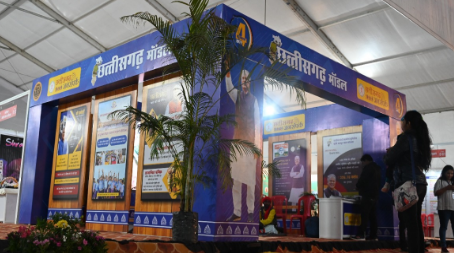 Information about schemes also provided through traditional folk-dance and songs

More than 350 stalls organises in the Trade and Build Fair

Raipur (thestates.news) | A photo exhibition based on the achievements of the last four years and important welfare schemes run by the state government under the leadership of Chief Minister Mr Bhupesh Baghel has been organized in the ongoing Cosmo Expo 2023 Trade and Build Fair in the capital Raipur. The Cosmo Expo 2023 Trade and Build Fair was grandly inaugurated on Friday by the Rotary Club of Raipur Cosmopolitan at Shriram Business Park situated on Vidhansabha road. About 350 stalls have been set up for this event which is being organised from 13 to 16 January.

It is noteworthy that the Cosmo Expo Trade and Build Fair has now been established as the biggest trade fair in Central India. About 350 stalls from government and private sector have been included in this expo. Cultural evenings are also being organized daily at Cosmo Expo.

A photo exhibition based on the flagship schemes of state government has also been organised at the venue by the Public Relations Department. Important schemes like Suraji Gaon Yojana, Rajiv Gandhi Gramin Bhoomihin Krishi Mazdoor Nyay Yojana, Rajiv Gandhi Kisan Nyay Yojana, Rajiv Yuva Mitan Club, Forest Produce Procurement and Godhan Nyaya Yojana have been displayed attractively. Information about the schemes is also being provided through LED screens. Pamphlets and brochures related to the schemes are also being distributed to the people visiting exhibition. Programs based on Chhattisgarh’s traditional songs and music are also being displayed in the stall.

The Raipur Foodie Lovers will indulge the taste buds of visitors at the expo. There is a separate large dome with 45 stalls that have been set up for food court. Here people will get an opportunity to relish the cuisine of different states of the country as well as Chhattisgarhi cuisine.