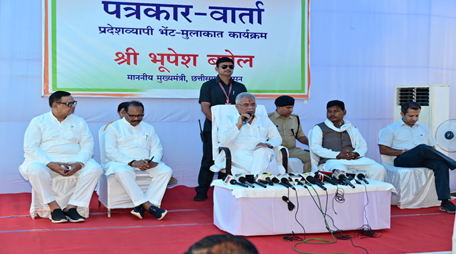 ‘It is a matter of extreme happiness for me’, says Chief Minister on public feedback

Raipur(thestates.news) | Chief Minister Bhupesh Baghel said during the Bhent-Mulaqat Abhiyan that started on May 4 this year, various schemes of the state government have received excellent response from the public especially Rajiv Gandhi Kisan Nyay Yojana, Half Bijli Bill Yojana, Haat-Bazaar Clinic Yojana, Godhan Nyay Yojana, and Swami Atmanand Excellent English Medium School Scheme. He was addressing a press conference organized in Dharamjaigarh today as part of his state-wide ‘Bhent Mulaqat Abhiyan’. He said adding that it is a matter of extreme happiness for me to know that all the schemes of state government are being implemented effectively in the districts.

Briefing about his main idea behind ‘Bhent-Mulaqat Abhiyan’, Mr. Baghel said “The core objective of this initiative is to know the ground reality of implementation of government schemes besides seeking direct feedback from the public about the functioning of the government and hear their grievances”, the Chief Minister said. He added that after a long pause due to rains, the public interaction drive has been resumed again from September 1 in Raigarh district covering villages Nawapara, Loing, and Raigarh under the Raigarh assembly constituency. This time, he was on a three-day tour to Raigarh district to visit Lailunga, Kharsia, and Dharamjaigarh assembly constituencies from September 12 to 14. Mr. Baghel said that yesterday he had visited village Chhal of Dharamjaigarh block and Gharghoda of Gharghoda block, where he met people and took direct feedback on the government schemes. So far, programmes have been held in 31 assembly constituencies of 15 districts of the state.