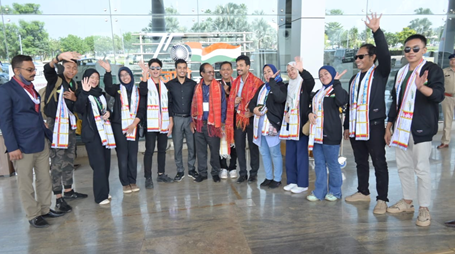 Raipur (thestates.news)|The folk artist group from Indonesia who came to Raipur to participate in the National Tribal Dance Festival thanked Chhattisgarh for its hospitality. The 10 participants who had come to Raipur left for their country from the Vivekanand airport today. A member of the team, Ms. Rabia Adin, said that they have wholeheartedly enjoyed the National Tribal Dance Festival in Raipur and they also got an opportunity to meet many people here. She said that they received a valuable opportunity to showcase their country’s tribal culture on a reputed stage. For this, she expressed her gratitude to the State Government. The team bid farewell after saying Chhattisgarhiya Sable Badhiya and Jai Johar. All the group members collectively said “Love you Chhattisgarh” and also greeted the people present there in their own language.